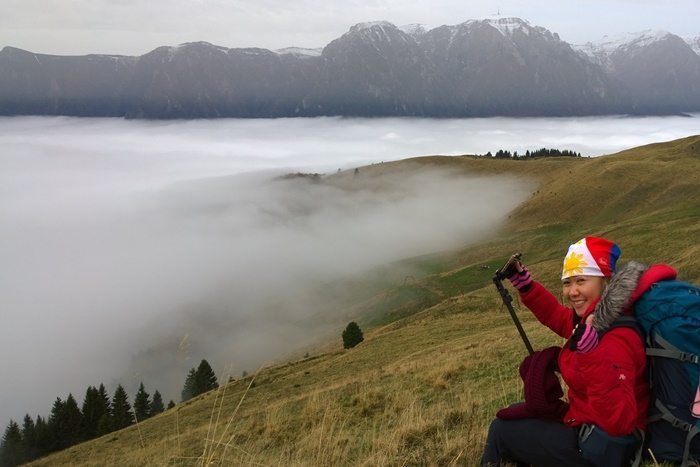 An unspoilt country located in Southeastern Europe and a member of European Union; bordered by Hungary, Serbia, Bulgaria, the Black Sea, Ukraine and the Republic of Moldova with terrains consist of mountains, hills and plains with four distinct seasons.

As a female who went solo backpacking to Romania, I was reminded to take good care of myself, as the country has a stigma related to Dracula, of thieves and of gypsies. But what I’ve seen were vibrant cities, stunning sceneries of autumn foliage, mix architectures, monasteries, citadels, castles and met friendly other travelers and kind Romanians which are all far beyond my expectations.

Name of Country: Romania
Date of Travel: October 9- 21, 2016 (Autumn season but snowfall has started in some parts of Romania)
Visa Requirement: Romanian Tourist Visa – Learn how to apply for a Romania tourist visa in UAE) The adventure started at Avram Iancu International Airport Cluj.  Cluj-Napoca is located at the Heart of Transylvania as the center of Northwestern Romania.

The best way to discover about the history is to join the Cluj Free Guided Tours led by the locals. You’ll learn about Daco-Roman Origins, Austro- Hungarian Empires, Gothic Architecture, Baroque, Renaissance, Neoclassical, Byzantine, Romanian, Neo-Gothic Styles and many others.

The tour will lead you along:

The Alexandru Borza Botanical Garden is a must-see place in Cluj as you can see several greenhouses, a Japanese Garden, a Roman Garden and over 10,000 plant species.

Thirty minutes away by bus from Cluj is the underground structure of Turda Salt Mine; an incredible place to explore at 137 feet below the ground. It offers various activities which includes boating in a lake with crocodiles. The underground structure of Turda Salt Mine

From moving from one place to another, asking for directions is the best way to go around. The website http://www.autogari.ro/ as suggested by two other travelers has helped me regarding transportation in terms of buses, of trains, timings and length of travel.

Heading to Northern Romania bordered with Ukraine, Maramures is a home of many villages where traditions are kept and practiced until the present time. A day immersing and going around to the picturesque scenery passing through mountains and valleys of Maramures, the following are worth seeing to:

In Viseu de Sus, indulge yourself in a magical journey with Mocanita– the last forestry narrow gauge steam train in Europe that will transport you into the deep forest and valleys of Carpathian Mountain. In any season, Mocanita won’t fail you for a dreamy and fairytale-like journey. From North to Central Romania, I took a 13-hour train ride from Baia Mare to Sinaia. The 13 hours travel isn’t a waste of time at all. It was a perfect time to interact with other passengers which are mostly Romanians.

Sinaia is named after Mount Sinai by Prince Mihail Cantacuzino after he returned from his pilgrimage in Mt. Sinai, Egypt. In the mountain of Bucegi lies a mysterious stone formation that is almost the same of Sphinx in Egypt. Romanians believe in a magical healing to be in that mountain.

Prior to coming to Romania, find a group that organizes day hiking. It is a rewarding experience seeing sea of clouds and snow-capped mountains. I had mine in Baiului Mountain in Prahova Valley with day hiking to night trekking, riding a cable car, guitar playing while singing Romanian mountain songs and resting in a farm served with mulled wine and lunch.

Interesting places to see in Sinaia are:

Peleș Castle is a Neo-Renaissance castle set on a Carpathian Hill in Sinaia. Explore the inside of this castle and you will see the grandeur and massive collections of paintings, sculptures, carpets, armors and furniture. Brasov is another city that belongs to Transylvania Region of Romania surrounded by Carpathian Mountains.

Join the Brasov Walkabout Tours led by passionate Romanians as they will guide you to historical places in Brasov, teach you Romanian dance, tell stories about Vlad the Impaler and explore the streets.

Following the scenic route from Brasov to the well-preserved citadel of Sighisoara passing through Saxon Villages, here we will visit the birthplace of Vlad Tepes. But don’t go alone to the room where Vlad the Impaler was born, I am telling you now, you are not alone.

What else to see in Sighisoara: Sighisoara, the Birthplace of Vlad Tepes

In Zarnesti , 30 kilometers away from Brasov, is the Libearty Bear Sanctuary, the biggest rescue center for brown bears in Europe. It is now a home to 85 bears rescued from captivity and cruel conditions.

The famous Bran Castle or known as Dracula’s Castle is a place which we think Romania is all about. But it is now a museum of once a medieval fortress and a royal residence. It is not creepy or haunted not unless you will enter the Torture Chamber. And this castle has nothing to do with Count Dracula.

I have had a wonderful time in Brasov. Many times I would just sit in Piata Sfatului, let the time pass by as I watch the place, the people and feel the cold weather. From this place, I kept looking at the Hollywood inspired Brasov sign at Tampa Mountain. And just a day before leaving Brasov, I took the cable car up and hiked the mountain going down all alone.

On the day I have to leave Brasov, a visit to Black Church, a Gothic-style church that was burnt during the Great Fire of 1689 (thus, it’s named black because most part of it was burned) just wrapped all the feeling of mixed emotions. It was the perfect place to say a “thank You” prayer. The organ playing on the background just added to the heavenly feeling on that place. At the Bear Sanctuary in Zarnesti As I have to leave Romania soon, I have to go to Bucharest to see the capital a day before going to the Henri Coanda International Airport.

In Bucharest, they have also Free Walking Tour in which I wasn’t able to join. But I enjoyed walking alone and being lost in the streets of Bucharest while searching for Historical Center and ended for a dinner in a touristy and historical Caru cu Bere Bar and Restaurant with a Romanian friend. The Palace of the Parliament

The following list of food and drinks were suggested or offered by locals:

Accommodations: For this 13-day trip, I have stayed in Hostel, Pensiunea, Casa, Villa and Hotel with price ranges from 40 Lei to 150 Romanian Lei per night.

Other places to see:

Expenses: I couldn’t recall the exact breakdown of expenses but this 13-day trip to Romania cost around 3800-4000 AED ( after converting the currency used of Romanian Lei, US Dollar, Euro, and Dirhams) inclusive of return ticket, visa fee, accommodations, food, tours, postcards and other expenses.

Note: If you have difficulty searching for Romanian Lei in UAE, you can bring small notes of Euro

From walking along villages and like stepping back in time along with cobbled pathways and hilly streets; climbing steep stairways of preserved citadels and secluded squares and towers; exploring medieval architectures and castles; trying all available traditional drinks and food; the unpredictable yet perfect weather and the Romanians with their culture and religious belief, everything in Romania is beautiful.

And you may have this question now:

Is it safe to travel alone to Romania? Yes.

“Hi, thank you for passing by. May you keep on chasing your dreams whatever it is.”}